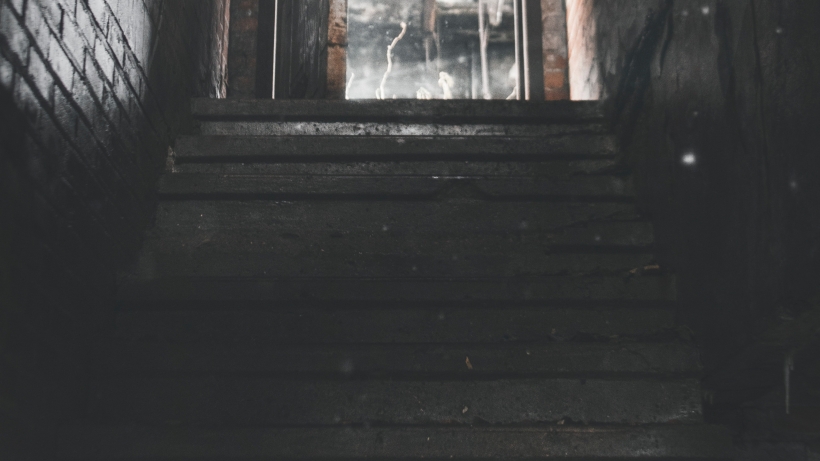 Mark woke up with a splitting headache. His arms were pulled up over his head and something tight was digging into his wrists. There was something soft, but big in his mouth preventing him from shouting. A sock maybe? He couldn’t spit it out because there was something else tied around his head holding it in place.

He was sitting on something cold and hard and guessed it must be cement, but it was too dark to tell. The air was cold against his bare skin. The last thing he remembered was sliding into Charlie’s bath. He’d been hoping to seduce her. Make her see that he belonged with her in this house. Couldn’t she see it’s kismet that she moved into his childhood home? He could see the pieces of his broken life slowly being put back together here with her, or at least he could before this happened.

“I told you, you have to stop doing stuff like this,” a male voice said from another room. A door squeaked open and a light flooded the staircase in front of Mark. He could now see he was in a basement.

“He was in my house, Kevin. In my bathtub. What was I supposed to do? Make him tea?” Charlie asked. Mark could recognize that melodic voice anywhere.

“No, but you didn’t have to lock him up in the basement either!” the man argued.

“He decimated my front yard,” Charlie exploded. “Do you know how much work I put into that?”

Mark had been jealous when he did that. He’d seen her flirting with that guy in the grocery store. He wanted to take her attention off the other guy.

“What happened to the last guy?” Kevin asked. “You’re lucky he didn’t report you when you let him out.”

There was a long pause. Mark strained to hear. What guy?

“You did let him out, didn’t you?” Kevin asked.

“In a manner of speaking.”

There was loud creak as someone stepped down onto the first step.

“Don’t go down there,” Charlie said. “It’s none of your business.”

“He’s fine. Look, I won’t do it again, but seriously, this guy is nuts. He put his picture on my wall.”

Mark resented that comment. He wasn’t nuts. He’d just wanted to show her how perfectly he fit into her life. Into her home. What better way to do that than with a picture?

“Seriously Charlie, you have to control your temper. One of these days it’s not going to end well for you.”

The light slowly started to fade as the door clicked shut plunging Mark back into darkness. Their muffled voices became softer and more distant until all he can hear was the soft thrumming beat of his heart.